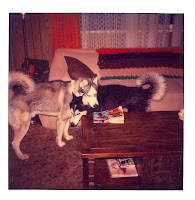 Joel used to buy tobacco from a store in a mall near-by to us. He got friendly with the manager of the store & they got on the subject of Siberian Huskies. Joel mentioned that we were looking for a companion for Ashley. This man was into showing & had a male Siberian & 3 females. He asked us if we wanted to bring Ashley to meet Clover. Clover decided that she didn’t want to be a show dog anymore by disqualifying herself at the shows. They said that we could have her for “free.” The only stipulation was to get her spayed. They said that she was an instigator of fights, so she needed to be watched. 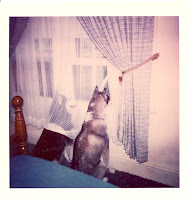 Let me tell you about this black & white adopted, beautiful Sibe, Clovie, who became at the top of our list, one of the best girls we have ever had. Our “free” husky had 3 types of worms & a staph infection in her skin. She was losing hunks of her hair. It cost almost $300 to get her healthy before we could even get her spayed. There was no question of “ever-ever” giving her back to those people!! When Ashley had to leave our family, our girl Clover stayed.

I was asked by people, “We were told that you cannot trust huskies around children?” Wrong! Clover would sleep under the port-a-crib when my daughter was a baby. She would stay outside of the blanket on the floor looking on when my son, as a baby, was playing. She never growled nor bared her teeth at any one of us or visitors to our house. We decided to get her a young

companion when she started to develop arthritis in her back legs. This way my son would have a younger dog to rough house with so Clovie would have an easier time.

When she let us know that her pain was too great & it was time for us to let her cross The Rainbow Bridge, I bought the Mister Rogers book on how to tell young children about the death of a beloved pet. My daughter, Erin, had just started 2nd grade at the time. I was so choked up, she patted my hand & said “Don’t worry mommy, I’ll read it to you.” Ahh, kids! When she got a little older she put together a photo album entitled “Our Clovie” with a letter that is still taped to the inside of it (it is so yellow!) to Clover about how much she had been loved by all of us. Clover was our very first adopted Siberian.
Posted by -The Mullin Clan's Mommy- at 4:22 PM

Clover sounds like such a nice doggie. And very beautiful too!

Thank you for sharing this story with us. Us Huskies are just the greatest.

That's such a beautiful but sad story. When our GrandBoy was born (he was the first grandkid) mom introduced him to Granddogs Starr & Ice when he was 3 days old, saying "this is Blaine, Sam's puppy, and you have to take good care of him and be very gentle". They both grew up with Sam, she was their girl, and they always were great with "Boogie", as he came to be known. When he was at our house, they always laid on the floor next to his bed. If he woke up or started making noises, Starr would put her face up by him and keep an eye on him while Ice went to get mom. Mom said they were the 2 BEST babysitters ever! When he started walking, he would use whatever part of Starr he could grab to pull himself up, and he'd hang onto her for balance, and lean on her to rest, she was always the complete angel of patience with him!
Clovie sounds like a wonderful, gentle, huskysoul. Anyone that thinks huskies aren't good with kids never knew a husky! We hope that man that had her before you gets worms!
Manykisses,
Bama & the RHP