Dude Ranch, Cowboy/girl-Up, & How We Got Into Horses -- 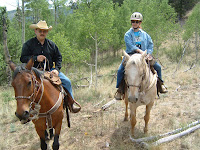 Nine years ago (1998), we didn’t know what to do for a family vacation. Suggestions were Atlantic City & Disneyworld. Got the - “been there, done that” - from the family! They wanted to do something different. Then Marlene suggested, “How about a dude ranch?” At that time the kids watched the Nickelodeon show, Hey Dude (& Marlene sometimes watched it, too!). She read & researched to find the best ranch with day & evening activities to keep Joel, Erin, & Josh from getting bored. Tumbling River Ranch in Grant, CO, a 4-boot family-owned dude ranch, was picked. Before we went on vacation, Joel suggested going somewhere locally in Pittsburgh to get our bodies used to horseback riding. We started riding at Rolling Hills Ranch in Bridgeville, PA once every other week until we went on our vacation. We left on a Sunday in June & returned the following Sunday for the dude ranch. They had camp groups for Erin & Josh. The day activities included half-day to all-day horseback rides, short & long rides to brunch ride, ride to a fajita lunch, & a day of white-water rafting. Marlene did not join in on the white-water rafting. She rode her horse! Joel took Erin & Josh white-water rafting. You can definitely say that this vacation started us/Marlene in horses. She wasn’t bitten by the horse bug; she was infested by it, ha-ha!! Everyone in the family had a great time. When we returned to Pittsburgh, Joel told Marlene that he would continue to take her horseback riding every other week at Rolling Hills Ranch. The one week that was to be the off week, Marlene suffered horse-withdrawal that Joel gave in & took her riding for her horse fix. At the end of September, the owner of Rolling Hills asked Joel if we would like to lease 4 of their horses for the winter. We would be able to come & go as a boarder. This would give us the opportunity to see if we wanted to pursue horses. Well, let’s see 3 & several horse in-between years later . . . . .
Posted by -The Mullin Clan's Mommy- at 4:04 PM