Fur the last part of October, R family wuz healing - that is Charlie & R daddy. On Monday, October 12, the vet had to come & do anuther procedure on that nasty thing on Charlie's back. It healed but healed open. We all were afraid that when Charlie would roll around in his stall (when he gets an itch!) he could get sumthing in it & gets infected again. So Dr. Leah met daddy at the barn. Daddy told us & mommy that he was glad that she didn't go (she couldn't take time off frum work) cuz she would have been so upset & sick cuz Dr. Leah had to first cut away the raised circle of skin (about an inch around) (daddy took a pic of it on his phone & it wuz very, very icky & bloody). Thank dogness that Charlie didn't know what wuz happening cuz he got a shot that put made him very, very relaxed in horsie la-la land. Then Dr. Leah stitched Charlie up.


On Friday, October 16 R daddy had to have surgery to reattach his left arm bicep tendon which was torn 90% (it happened at work, not on or around Bud). Daddy knew way back in March that he would have to have the surgery, but put it off as long as he could so he could spend the Spring, Summer & part of the Fall riding the trails wif his Bud, mommy & Charlie, & their trail riding buddies.


Then, for the next 2 weeks, mommy had to go every night to the barn to clean Charlie's wound site (& to top it off he got a touch of a horsie skin infection & had to have spot shampoos on his back & sides every night) (poor big guy, enuf is enuf!!!). Then daddy having his surgery & in a cast so he couldn't drive. So mommy had to drive with him as a passenger to the barn every night (she doesn't like night driving). Poor Charlie could get out of stall, but all he wuz allowed to do wuz walk around for 2 weeks so he wouldn't pull the stitches. He wuz a very grumpy horsie along wif a very grumpy daddy cuz he wanted to drive, but he wuzn't allowed until he got his cast off. R poor mommy needed a vacation! Since daddy is a rightie & he had surgery on his left arm, he helped her around the house by doin stuff fur her. 2 weels later, Charlie got his stitches out and he wuz allowed to run around which made him a happy horsie! The day after that, daddy got his cast & stitches out & could drive again & he wuz a happy guy & mommy got to be a passenger in the car again which made her very, very happy. 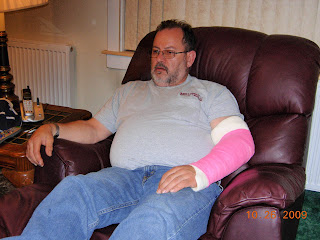 2 nights b4 he wuz to see the doctor, daddy wrapped his cast (cuz it wuz fallin apart) with pink vet wrap. His Dr. had a good laugh when he saw it!


Well, finally thingz are lookin up! Mommy can now ride Charlie again which makes her a happy girl! Daddy's surgery wuz a success, but he still has a lot of recovery yet until he is back to work hands-on & can ride again. Hopefully, when he sees his Dr. again the beginning of December, he will be able to go to therapy to build up strength back in his arm again. 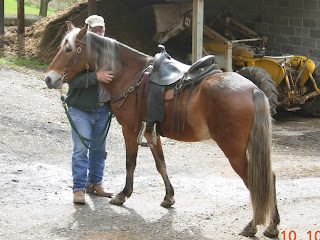 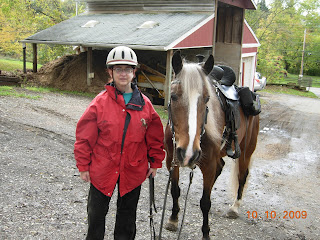 And, we had the most portant job to do in R house - we helped take care of daddy & mommy & kept up their spirits!!!


Sos, friends we have not furgotten all of woo - frum time to time we stopped by bloggies to see how all of woo were doin - just didn't leave a message.


Til next time (hopefully not so long a time!!),

Thank woo so much fur mentioning me on yur bloggie ~ I am feeling much better!

So good to hear from woo again! we've been thinking 'bout ya. We're furry glad wffurryone is getting back to health, too. Woo boyz have done an excellent job taking care of them!

NAK and The Residents of The Khottage Now With KhattleDog! said...

Here's to healthier days ahead!

Wow you puppers have been really busy! I am glad to hear that every person and every horse is feeling better now.

My first visit to your blog and I couldn't stop readin' it. What a story! It does sound like everyone is going to be OK though and that is what I am glad of.

Hope yer Dad and Charlie are just about healed....Charley is sure a beautiful animal....bet the 2 of ya have been busy with all the work around the house, helpin' yer Mom 'n Dad too.....a pets work is never done.....sigh.....

Hey boys,
Wow seems like a lot had happened in your household!! But it's a good thing you boys were supervising everything...
Psst.. we think your dad's pink cast is pretty cool!

Mom you certainly do need a vacation taking care of everyone. Sure glad all is well. We have missed you..

WOW, what a month! I bet you were ready to turn the page on October. I'm glad everyone is on the mend now!

The Husky in the Window said...

We are furry glad all are doing well at your home. Hope woo give your mom lots of hugs and kisses.
Husky Hugs, MayaMarie