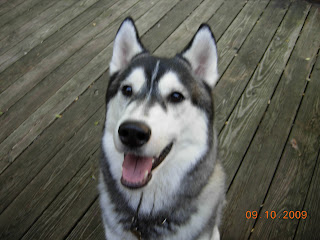 Hi All,
Mommy-Marlene here! Hoping that all of you, 2-legged & 4-legged friends had a wonderful summer! (I'm still holding on to the summer as tight as I can, not looking to the evenings getting darker earlier! I still want to play (ride on the trails) after work! I apologize (yes mommies do that sometimes!) that Cosi & Juni haven't been able to keep up with all their blogging buddies. I promised them that I won't hide their puter as much & they will be able to start posting again & keep up with all of you.
Several weeks ago, Joel & I took the boys to the vet to have their yearly physicals. Juni weighs 50 lbs.; Cosi weighs 48 lbs. Juni might be bigger, but Cosi is one solid boy! The joys & perks of having Sibes - they were greeting & wooing all of the other patients so loudly that the staff could not talk or hear the phones ring. That's my boys! We were put in a room immediately! They got their yearly vaccines & received a clean bill of health. 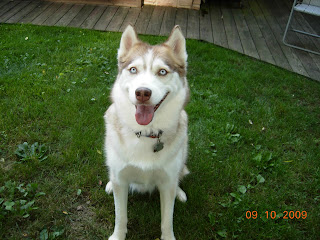 Last week I was petting Cosi & giving him a rub down & on his right side felt a hard lump the size of my pinkie nail. It didn't bother him when I pushed on it. I called our vet & they squeezed us in. They took Cosi in the back room to get a scraping & some fluid from it. I could hear him telling them that he was not pleased what they were doing. The tech brought him in & asked me how I liked her furry clothes. Cosi was all over her! The vet came back in to tell us that it was nothing & not to worry about it - they had looked at the scrapings & fluid under their microscope. Woo, was I relieved!

That same afternoon I had to have the horse vet at the barn for Charlie. My poor wallet - but you know, I don't care - if my boys needed to be seen so be it!! Charlie started to break out with a hive-like rash a few days before & it was really spreading. He had a skin infection called "rain rot" from having a muggy summer & sweating a lot with the humidity. I was told that this can occur even if the horse is kept groomed & clean. We have been spot-shampooing Charlie with a medicated shampoo every other day & making sure that he is dry before putting him in his stall. He looks like a wannabe spotted Appaloosa with hair missing in circles on his back. But, it is not spreading anymore thankfully! 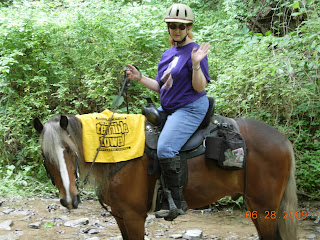 NAK and The Residents of The Khottage Now With KhattleDog! said...

I'm glad woo had a good trip to the vet!

I do hope your mom lets woo get bakhk to bloggin' with us soon!

Tank woo fur the pupdate and horsedate too!

Hugz&Khysses,
Khyra
PeeEssWoo: Mom says we don't do football anymore...not with 'him' on our old team AND 'him' being pawmitted bakhk in to the league...

Glad to know that everypup (and horse) passed its vet visit.

Good to hear that Cosi's issue is a non-issue and that Charlie is getting better.

Sounds like everyone is good from their visit to the V.E.T. :)

WOOOOHOOOO Steelers!!! Oh Heinz... why do you have to worry us so. Glad Big Ben was there to save the day!!

Sounds like good news at the vet! We miss you guys and yes GOO STILLERS! That game was a nail biter!!

The Army of Four said...

We've missed you!
The Stillers sure had a close call last night!
Tail wags,
Storms

Good to hear from you!

We're glad all the boys (Juneau, Cosi, and Charlie) are healthy or on their way there.

PS. We are gearing up for College FB season!

Well, I'm glad to hear that everypup and everyhorse is going well!

Hi my Cosi, it was so nice to see a new photo of woo!!! I have missed woo so!

I am so glad yur lump wasn't anything serious ~ Mom asked me to ask woo if it was a cyst? I hope Charlie horses skin gets better real soon.

I just noticed that the new photo of Juni looks a bit like Princey's brother Shades! Here's a link to a post on our bloggie, let me know what woo think. I think they might be brothers from a different mother!!! Maybe Juni is related to Princey!!!

Oops, silly Mommy forgot to add the link fur me!!!

You are back guys!! We missed you..
Glad that you have both received a clean bill of health... nothing can beat that!

Hey boys! Glad you are back, and the vet visits went well! Glad the lump was nothing. Samuel has lumps. Luckily they have all been lipoma's (fatty non-cancerous growths).

Charlie is sure looking handsome!

so glad to hear about your clean bills of healthy! woo-woo!

woof, that's good that y'all are healthy and that the lump was not a nasty.

Glad you are doing OK.. I didn't have to fight my way out to go potty on Thursday or Friday. did you get out OK?
your pal, Morgan